Who’s a pretty boy then? 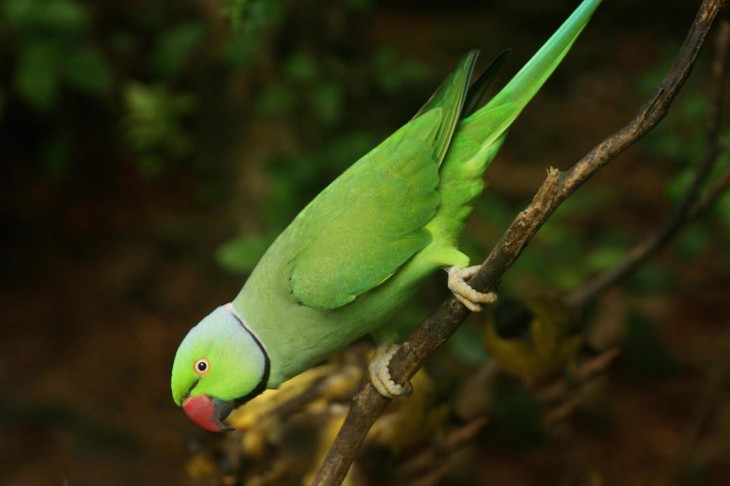 Take a walk in Parc de Bruxelles this spring and you may suspect that someone is lobbing tennis balls from treetop to treetop. These balls of greased lightning zip across the sky trailing green streaks behind them like miniature comets. Blink and you miss them.

As they screech overhead the sound barrier shatters with a noise like the squawk of an angry parrot. Not surprising really, given that these critters are angry parrots – rose-ringed parakeets to be more precise. They have taken up residence in Brussels and want you to know it. They are in London too. Last summer I came across an Indian bean tree in my street with no fewer than eight of the fellahs in it, all tucking into a hearty meal of Indian beans. A real bean feast if ever I saw one. Under the tree was a growing mound of bean husks, littering the pavement like so many discarded crisp packets.

In northern Europe, parrots are still rather exotic creatures, but exotic as they are there is one respect in which they are no different from common animals like squirrels, dogs and rats. They can be verbified. You can squirrel something away, you can be dogged by bad luck, you can rat on a friend, and yes you can parrot someone. There are nouns too. If you go ratting, you set off to engage in the illegal sport of rat-bating, usually with dogs. Ditto for squirreling, presumably. If you’re not familiar with the expression ‘to go dogging’ I suggest you google it for enlightenment.

Badger, there’s another one. If you badger someone, you hound them (help there’s no escape from animal-based verbforms) i.e. you bait or harass them. According to a legend that everyone likes to cite, once, long, long ago, badgers got the better of the French booth, with quite disastrous consequences. They (the French booth not the badgers) were required to interpret the phrase: “The boys skipped school to go badger-bating in the woods” and did so not with reference to cruelty to badgers but with reference to spanking monkeys. Again, please refer to google if you are struggling to keep up with this below the belt stuff.

Enough monkeying about – let’s get to the point at hand: parrots. Revenons à nos moutons. I don’t think you can go parroting, but you can definitely parrot. In fact that’s exactly what most of us do for a living. Just as with parrots, there are large colonies of interpreters living in and around Brussels, most if not all of them pining for the fjords. No I jest; Norway never joined the EU so the Norwegian Blue is still a rare sight in Brussels. Now, Danish Blue, that’s another matter…

Cheesy Monty Python jokes aside, the interpreter’s ability to parrot does merit attention. When we are not swanning about in the bar, pigging ourselves in the canteen or haring about between meetings we are required to engage in a bit of multi-lingual parroting.  The expression “to parrot someone” isn’t usually complimentary. It means you repeat what someone else has said without thinking for yourself. Interpreters could hardly be blamed for that now. We go ferreting around in our minds to find the best-fit translation and that intellectual juggling act is one of the most complex the human brain can engage in. So to say that what we do is parroting is a gross calumny.

I admit, occasionally I am foxed by a particular word or sentence when interpreting and am forced to deploy a coping strategy. When foxed, sometimes I have no choice but to parrot. In other words just now and again I am forced just to take each word on its own, find its equivalent, bung in a bit of grammar and hope that what I have produced, or parroted, is what the speaker intended. Very occasionally in meetings I am so foxed that I find myself parroting, and end up rabbiting on, my sentences snaking about all over the place in search of a meaning. It ends up like a Pirandello play: six sentences in search of an author.

Now we’ve alighted on matters thespian, indulge me, will you, whilst I quote Hamlet: “To bee or not to bee”. Sorry just had to get that off my chest. I know all these animal verbs are difficult bear. Sorry.

Ah yes, parrots. There is a serious point here somewhere, if only I could stop pretending I was Dr Dolittle for one second. And here it is: parroting rarely makes for good interpreting. Whilst I must admit to feelings of jealousy for colleagues who are able to chomp their way through speeches, reordering and transposing the words in a neat and orderly fashion, my real admiration is for interpreters who get right inside the minds of the speakers.

Years ago, I remember listening to a senior colleague who had the uncanniest ability to say what the speaker was saying almost before they had said it. I thought it was magic. It wasn’t. It was just that he was a senior staff interpreter at a large international organisation and had worked out what all the delegates were about. Even now I am reduced to speechless admiration for a senior staff interpreter (not the same one) who will say things like: “Listen up Smorltalk. At half past four Mrs Soandso will accuse Mr Soandso of undermining the international whaling ban”. And, blow me, if he’s not usually right. Ok so it’s a form of insider dealing, but it doesn’t half make for some inspired interpreting.

You see, being a parrot isn’t necessarily something to crow about, because, odd though it may sound, delegates aren’t always all that keen on hearing all the words in the right order. There are loads and loads and loads of words spilled in the course of a day of meetings, and from the delegate’s point of view it is far more useful if we concentrate on the really important bits and drop some of the padding. So we need to fish out the operative bits and make sure that we present them in an easy-listening kind of a way. And the only sure-fire way for us to know which the important bits is for us to clamber into the speakers’ heads and have a good old rummage around.

So if you’re a bit of a parrot, put down that cuttlebone, get off your perch, break out of your birdcage and go and have a chat with the delegates. No, don’t chicken out! Don’t duck the issue! Have a gander at the real live delegates. No really, stop grousing and get on with it. You’re not weaseling out this time. If you want them to pony up for your work, you’re going to have to stop sniping. Swallow your pride and go man the barricades!

Apologies to all my female colleagues. Go person the barricades!