Review: “The pioneers of simultaneous interpretation” – AIIC event in London on 30 Sept 2014 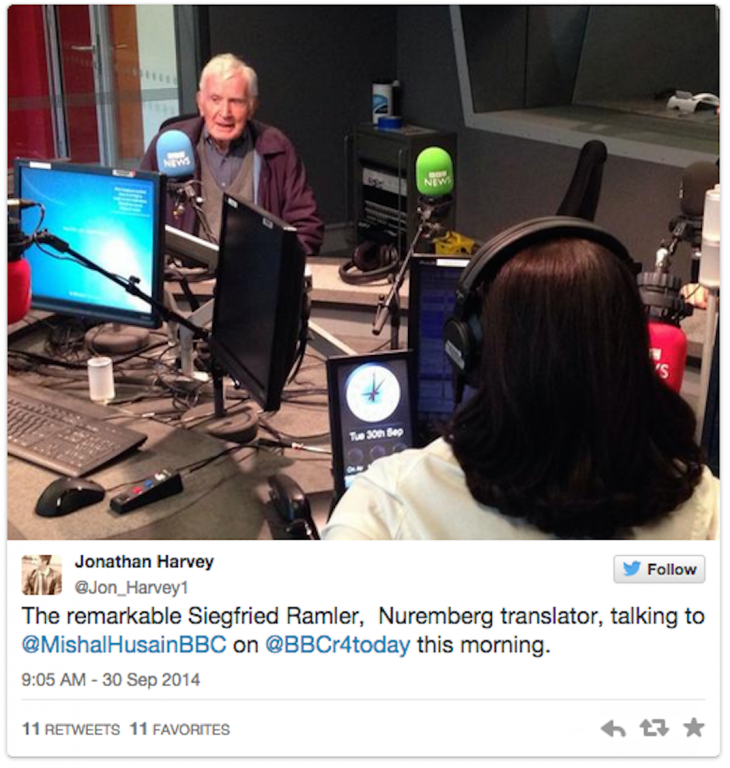 On September 30 I had the pleasure to participate in a very special event organized by AIIC. An occasion even more special to me as I was lucky to take part in it without securing myself an official place on the guest list. Due to my poor health condition that evening I only decided to stay for the first part of the seminars, the one which attracted me to the whole event in the first place.

The special guest that evening was Siegfried Ramler, a German and English speaker who worked as a simultaneous interpreter during the Nuremberg Trials, held between 20 November 1945 and 1 October 1946. From the very first moment of Mr Ramler’s story I felt deeply touched by his account of his fascinating past life. Originally from Vienna, by the age of 22 he became bilingual, thanks to his university years spent in London, and was asked to hire out his skills to the war tribunal in Nurenberg. At the time he was the youngest of all the interpreting personnel working in the proceedings. However, the four-year period and the intensity of interpreting work in both the pre-trial interviews and the Trials themselves allowed Ramler to gain extensive experience in the field.

Personally, I was hugely impressed by his emphatic and multiple statements of impartiality in the proceedings. He was asked numerous times by the main interviewer, Philippe Sands QC, and several members of the audience how he felt and what he was thinking interpreting the Nazi witnesses. One of them was Hans Frank, the Governor-General of occupied Poland who, later in the trials, was found guilty of war crimes as well as crimes against humanity. Mr Ramler would relentlessly reply that to him it was not a question of passing a moral judgment but rather a linguistic challenge he was determined to complete to the best of his ability.

As Kate Macintosh, the Deputy Registrar at the ICTY, put it, the main principles to be observed by interpreters working in international tribunals, still valid today, are impartiality, neutrality and accuracy. Mr Ramler was certainly entirely devoted to working in compliance with those standards. The only time perhaps that he expressed his personal and thought-provoking view on the atrocities caused by Nazi Germany was when he shared with us the following thought: How could a nation that produced so many distinguished philosophers, writers and musicians also produce so much evil? If the relevant laws are not in place or if they are not observed, the same could happen anywhere.

Photos and tweets from the event: AIIC Pays Tribute to the Pioneers of Simultaneous Interpretation, Angela Keil‘s report on Storify

Aleksandra is a London-based freelance interpreter and translator (Polish A, English B, Russian C) and a visiting lecturer at the Department of Modern Languages, University of Westminster.