From mikes to riches? How much money do interpreters make?

Whilst I was waiting to collect my daughter from school the other day, I got chatting to one of the other mums. She knew I was ”in the language business” and was keen to learn more. (She speaks some French and loves holidaying in Provence, you see.) Her first question was: “Can you actually make a living from it?”

Yes, as a matter of fact you can. You’ll need a lot more than a little French and a love for French cuisine, though.

She stopped short of asking exactly how much I make in a year but I would have been happy to tell her: less than a London banker. As an AIIC member based in London, Count Smorltalk, will tell you.

But I bet you’ll appreciate some hard data that would let you compare your professional situation with that of other conference interpreters around the world, not only in London. Read on then. 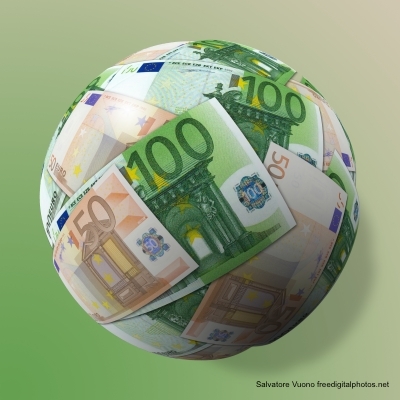 Every few years AIIC, the only global association of professional conference interpreters, publishes a comprehensive statistical report. It covers rates charged by members of AIIC around the world, average number of days worked in a given year, billing units (e.g. day, half-day), as well as job satisfaction. In the latest report, for the first time an attempt was made to estimate annual gross income too.

The results of the last survey (2012) are now out and have been summarised neatly on the AIIC website: AIIC statistics: Summary of the 2012 report. The evolution of interpretation markets and demographics around the world. Even a cursory glance at the figures in the summary itself is enough to realise what a huge amount of data had to be processed and analysed. A humongous task, well done to AIIC!

The survey was conducted among AIIC members only.

Stats from a given region come from interpreters who do not necessarily work in that region alone. In other words, the rates UK-based interpreters report do not necessarily mean “rates in the UK” (see graph). Similarly, AIIC colleagues based in Poland often work for the EU institutions in Belgium, Luxembourg or France – but their rates (and income) are shown under “CECO”.

Unsurprisingly, the effects of the financial crisis are still visible in the amount of work reported. Almost half of freelancers reported less – or much less! – work in 2012 (cf. 2010 report), especially in Western and Central Europe. The world average number of days worked in 2012 was 88, the lowest recorded in the last 15 years. And there were as many as 30 percent of respondents who worked less than 50 days in 2012.

On average, half of all days come from the private sector and ca. 30 percent from what AIIC calls the agreement sector (e.g. EU, UN). But in some markets interpreters get more work on the institutional market, especially in countries with large intergovernmental organisations (like Belgium or Switzerland), or where interpreters are mainly recruited by European institutions (like CECO).

The ”number of days” metric should be put in a wider context though. What we often tend to forget – or rather our clients might not be aware of – is that “work” also means preparation and admin time. For one day of actual booth work you might need to add another one for preparation (maybe even more, depending on the meeting). See Julia Böhm‘s excellent piece: Budgeting time and costs for professional conference interpreters: who wants to be a millionaire?. To those of you who wish to learn more, especially about time tracking, and are thinking about changing their pricing strategy, I highly recommend It pays to know where your time goes (parts 1 & 2) by Julia Böhm again, Almute Löber and Ignacio Hermo.

Is the pay-by-day principle still alive?

Yes, it is. In Western Europe (in the UK: 100 percent). Everywhere else interpreters adapt to “special market requirements”, as it is put in the report.

You can easily guess which mode was more prevalent. Staff interpreters work almost exclusively in simultaneous (a whopping 96 percent), but freelancers are close enough: 85 percent of all their days were in sim.

Where do I need to move to get the best rates?

Switzerland, of course. Or Germany.

But don’t pack up just yet. Wait till you see the income figures. You can demand and get very high rates but your annual income is a different kettle of fish (do read Count Smorltalk’s post, if you haven’t yet done so). Also, bear in mind AIIC stats don’t tell you much about purchasing power. Do the math. Which will buy you more: 650 euro in New York or 500 in Vilnius?

Average sim rates ranged from 340 euro in Central America to over 1,000 in Switzerland. In Europe, the lowest mean rates were reported in Greece (400). The UK & Ireland region, which I know best, fared quite well, especially if you consider the enormous price pressure from agencies. Similarly, in spite of the doom-and-gloom reports I hear from colleagues in Poland, CECO’s stats don’t come bottom of the rates table: 477 euro per day. But again, the figures come from AIIC members, who might work more better-paid days abroad and in the agreement sector – and are not exactly numerous in the region anyway.

Average consec rates are higher than sim in Western Europe, in some countries significantly so (Switzerland with 1,200), while in Central Europe they are significantly lower (lower status, considered easier?).

As you would expect, there is a gap between the average rates on the private market and what we get paid in the agreement sector. Just look at Switzerland! On the other side of the scale you have countries with a much less robust private market, where the agreement sector rates are higher than the overall mean private rate, viz. Eastern Europe, South America, Africa and Turkey.

What matters most: annual income

Aaand… the winner is… Switzerland again!
Interestingly, Germany comes second rates-wise, but falls to sixth position on the income list. The US colleagues reported lower rates but their overall annual income is higher; they work more days. Perhaps unsurprisingly, Belgium, with its EU sector, is number three in the income table.

… but more importantly, can you make a living out of interpreting?

Is your annual income sufficient if you consider the cost of living, taxes, insurance? How do you compare against other professions in your country? These are the crucial questions you need to ask yourself before you decide to move to Switzerland, or anywhere else for that matter.

Especially that – here comes the big surprise! – more than half of our Swiss colleagues had an extra job! In the Nordic countries that percentage goes up to 70 (accounting for 30 percent of their remunerative work).

So if you are thinking of moving, choose Belgium. Looks like the majority of interpreters there make a living exclusively from interpreting.

Better yet, live in a low-cost region and earn your money in Switzerland. Best deal ever. 😉

Hey, actually, what matters most is… job satisfaction!

80 percent of respondents said they were satisfied or very satisfied with their profession. Although there is not one AIIC region where the estimated annual gross interpreting income would equal the average London financial services salary. Count Smorltalk and I agree: it’s all relative and money isn’t everything. Eat your heart out, banker!