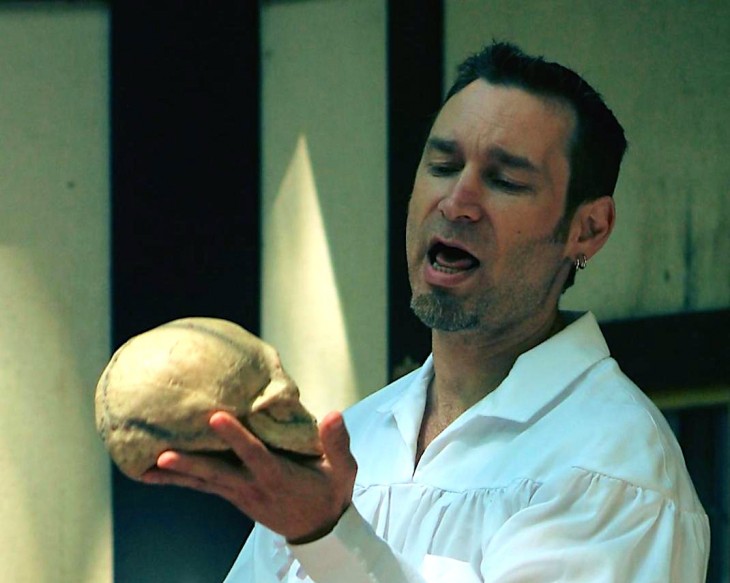 “To be, or not to be” is almost always delivered with a flattish intonation. It may be “the question” but nobody makes it sound like a question. How different then from the question you would ask if, for example, you are in doubt as to whether the meeting you are about to interpret is being held in room 2B and want to check: “Which room is it? 2B? Or not 2B?” Now that’s what I call a question. And spoken with rising intonation everyone will know what you want

“To be, or not to be” is declaimed with more or less flat intonation then. That’s settled. But what if, by some great misfortune, Russell Crowe were ever to perform the famous soliloquy? I guess then it would all be couched in the interrogative mode: “To be??? Or not to be???” Mr Crowe is Australian, you see, and if you are Australian basically everything sounds like a question. Fortunately Russell Crowe hasn’t to my knowledge ever been asked to play Hamlet. But Australian Question Intonation (AQI) has in any case so infected modern British English that it is only a matter of time before we’re all using it. Actually it’s a bit unfair to blame it all on the Aussies. Geordies, Belfastians and some other native Brits also use rising pitch at the ends of phrases, known as High Rising Terminal (HRT).

The HRT epidemic is spreading and increasing numbers of young Brits are using question intonation in ordinary non-interrogative speech. I guess new HRT users are mostly sub forty though some are older. Then again, HRT for the over fifties is more of the hormone replacement kind than the upward pitch kind.

Why is this happening? Why are well-educated young Brits making everyday comments sound like questions? Perhaps it’s the insecurity of youth. Perhaps it’s a reaction to pontificating old fogeys going on and on about how disrespectful, anti-social and violent young people are. Perhaps it’s ironic and postmodern? Wotevver!

But we interpreters must stay abreast of such developments if we are not to get caught out. Ok, so mostly we work for pontificating old fogeys, but there is a new generation of delegates starting to make the running, and before you know it there might be a spate of assertions being misinterpreted as questions. Oh the confusion! It could start a war.

If you’re an old fogey, here’s a something for you. Take yourself back to the fourteenth century for a moment and recall how things used to be pronounced in the good old days. Yes, you remember! Back then, before all these newfangled vowel sounds came in during what is known as the Great Vowel Shift, words used to sound very different indeed. Time was pronounced “team”, mouse was “moose”, and moon was “moan”. It’s why English is such a pain to spell. They fixed the spelling standards then changed the pronunciation.

From what I can gather Shakespearean English would have sounded like some kind of weird hybrid of modern Geordie and West Country. Loads of ooh-arrs and northern vowels. It’s quite seductive actually, and worth going to a Shakespeare production in OP (Original Pronunciation) where they try to pronounce things as they think they would have been pronounced at the time.

It’s important to keep your vowel movements regular, so it’s good to know that the great vowel shift hasn’t stopped moving. Yes, vowel shifting is alive and well in twenty-first century Britain. For example, old fogeys will just have to get used to the fact that young Brits, say under the age of twenty, no longer seem to be pronouncing their “o”s in the twentieth century manner, but are saying it them if they had an extra “ie” tagged on. Some of the diphthongs have to be heard to be believed! One of the most common expressions right now is OMG, or “Oh my God”. We twentieth century foxes are having to recognize the obsolescence of our own pronunciation, for no longer is it “Oh my God”. It’s “Oie my God”.  And that “o” vowel ain’t only shifting among the vulgar classes, neither. Young posh kids are using it too.

Brits do love to make each other feel awkward. Back in the 1950s the expression U and Non-U was invented to describe the difference between Upper Class English and everyone else’s English. A person could be labeled Non-U by their use of “lounge” as opposed to “drawing-room” or “serviettes” in place of “napkins”. Not only did you have to mind your p’s and q’s if you wanted to be taken seriously, you had to speak in RP (Received Pronuncation). As for dropping an “h”! Shame on you. But as our good Danish prince said, “There’s nothing good or bad, but thinking makes it so” and however much of a sin it was, and is, to drop an “h” ‘ere and there, back in Will Shakespeare’s day, “h”s were dropped with gay abandon and nobody thought anything of it.

AQI, HRT, OP, RP, P’s and Q’s and H’s. OMG it’s alphabet soup out there. Enough! Therefore, “since brevity is the soul of wit”, I shall draw this exegesis to an end by protesting “Though this be madness, yet there’s method in’t”.