What have the Romans ever done for us? 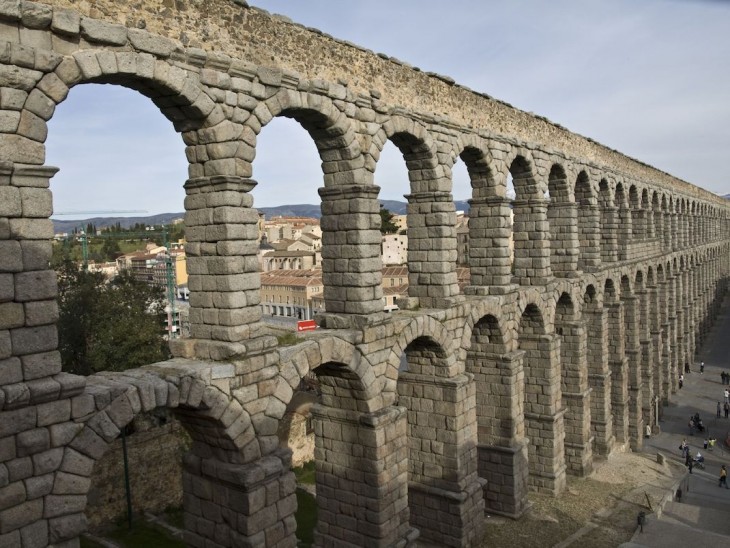 “Apart from the sanitation, the medicine, education, wine, public order, irrigation, roads, a fresh water system, and public health, what have the Romans ever done for us?”1 What indeed? Actually they gave us their language. Well I say gave, but of course they didn’t so much give it as impose it whilst they were busy running the place for three or four hundred years.

Some eighteen centuries ago the British establishment spoke Latin, and the underclass spoke Celtic. But then the Anglo Saxons arrived and turned everything on its head. After that the establishment spoke German, and before long so did everyone. But nothing stands still for long, and after the Viking shock and awe period, although German was still flavour of the month, it acquired a bit of a Danish twang. But then along came the Normans and decreed that henceforth the English establishment would speak French, which as we know is just a more modern form of Latin. And so then the posh people spoke French for a few hundred years. Really clever bods spoke Latin in preference to French in preference to German in preference to Celtic. And so it went on and on for centuries, right up to the present day when everyone now speak Jafaican – a hodgepodge of Caribbean and Cockney. It’s, laahhk nang. You get me?

Clever people, who fortunately no longer speak Latin, have named this newest incarnation of English ‘Multicultural London English’, or MLE for short. It is pervasive, and like all contemporary phenomena it ill behoves us to look down upon it. This new form of English has arisen out of the linguistic melting pot of the London immigrant communities and is replacing older dialects like Cockney. This is not the English of the establishment but cannot help but influence it. Just as the odd Danish word slipped into the Germanic tongue of England in the 8th and 9th centuries and a pidgin arose, later to become English, the odd Jafaican word and verb form is slipping into our everyday speech. Innit?

A hundred years ago George Bernard Shaw, who was Irish and well out of it, said: “It is impossible for an Englishman to open his mouth without making some other Englishman despise him”. Too right. I’m middle class, and I say everyone should speak like me. I really don’t much like people who say “ows” when they mean “house”. And the ones that say “hice” are even worse. Mind you, in modern Jafaican I suspect I wouldn’t be saying, “This is my house” at all. I’d say “Dis my yard”. To which you, impressed by my house, would say “Sick, man”, except of course if you didn’t like it in which case you would say, “Nuff deep, man!”

Ideally, we need to master all these registers if we are to recreate the authenticity of the original when we interpret into English. Verlan to Jafaican would be cool, man. But that’s not likely to happen till I have been on a Verlan refresher course. Meanwhile, what other ways can we find to pass the time in the English booth?

I know, how about using Plain English? Let’s strip the language of all its fancy Latinate words and go back to good old-fashioned proper English, i.e. German. It wouldn’t be the first time this had been attempted after all.

Back in 16th century England, when clever folk spoke Latin and everyone else spoke a form of German that was beginning to resemble modern English, a bunch of literary critics attempted to boot fancy Latin and Greek words (so-called Inkhorn terms) out of the country. They wanted to dismiss (sorry, ‘dismiss’ is banned, try ‘send away’) fancy new foreign words and to celebrate (sorry, try ‘enjoy’) ordinary words, believing in the superiority (sorry, try ‘better quality’) of mundane (sorry, try ‘commonplace’) English terms. Wow that’s like playing ‘Just A Minute’. Anyhow, perhaps they had a point. They booted out words like ‘illecebrous’ and ‘ingent’, and thank goodness for that.

This Anglish will be flexible bendsome and its grammar speechcraft will be pure. We will renounce forsake the delight happiness we get from the employment use of fashionable chic imported words, and educate teach ourselves to select pick only those words in the language tongue, which do not degrade demean us. We must be ever vigilant wary, and prohibit ban all loan words if our profession calling is to be just sound and proper meet. We should not be timid shy in our efforts, and must be adept skillful in our rooting out of the foreign serpent worm. This is only the prudent wise thing to do given the grievous woeful state of the English dictionary wordbook in modern times now. It is about our identity selfhood after all.

Here’s the new slogan: “Romanes eunt domus”, err no hang on, I never was any good at Latin. Come on, come on! “Romans go home!” Romanus goes like –anus, vocative plural of anus is –ani. Imperative of ire is ite. Locative of domus is domum. “Romani ite domum” 2. Now write it out a hundred times. After all, what have the Romans ever done for us?