In praise of nonsense

A good friend of mine, and a stupendous interpreter to boot, once made the profound and ever so slightly arch utterance, that the way to be a good interpreter was quite simple: “Know all the words”. Well, thanks for that! Clearly, knowing all the words is going to be a considerable help since words are our stock-in-trade and the more of them we have piled up in the warehouse the better business will be generally speaking.

Oscar Wilde, who was not an interpreter but did have a nice turn of phrase, claimed that a person who knows the price of everything and the value of nothing is a cynic. I would maintain that a person who knows the words for everything and the meaning of nothing is a certain Mr Google Translate. And although Mr Google Translate is breathing heavily down all our necks, he has terrible halitosis and his translations stink. Clearly, there is a little more to interpreting than knowing all the words, or as Mr Google Translate would have it “Unde patet quod non est in sermonibus parum gnarus quam interpretationem.” That’s Latin by the way. Nonsense fortunately.

I say nonsense fortunately, but of course just very, very occasionally it does happen that I too produce something in the way of nonsense. I shall never forget my first afternoon in the booth. I sat nervously awaiting the half-hour of destiny as my colleague gave a thirty-minute master class in interpreting. When finally, with clammy finger, I did depress the microphone button and proceeded to serve up a dollop of words with a small side helping of grammar, the UK delegate put his head in his hands and groaned audibly. In fact his head remained in his hands, turning mournfully from side to side, for the entirety of my half hour’s maiden performance.

This did not bode well for my future career. The career for which I had already given up a career. What had seemed like a good idea some 18 months previously was beginning to look like it might be a damp squib (Google translate offers: libellus restingueret for that, which as far as I know means “wet book”.) My senior colleague found this turn of events rather amusing, and I naturally assumed that the joke was at my expense. It was only many years later, when I recounted the experience to this same colleague, that he told me that the delegate in question was a notorious drunk and that it was unknown for him to not be comatose in an afternoon session. If only I had been made privy to that item of information at the time I would have been spared from taking to the bottle myself.

That little diversion down memory lane has led me away from my point, which is this: we English speakers have a long and noble tradition of nonsense, and it is no bad thing for us now and again to doff our interpreting hats in tribute. We are a people, after all, who in all seriousness force eleven-year-olds to memorise, on pain of punishment, the following lines from our Victorian literary canon:

Far and few, far and few,
Are the lands where the Jumblies live;
Their heads are green, and their hands are blue,
And they went to sea in a Sieve.

If that brings back memories of caning, cold cabbage and corduroy shorts in winter, then you too are British. If it is nothing but nonsense verse to you then congratulations, you are possibly not British and have in any case identified the prized literary genre to which this refrain belongs: Nonsense Verse. 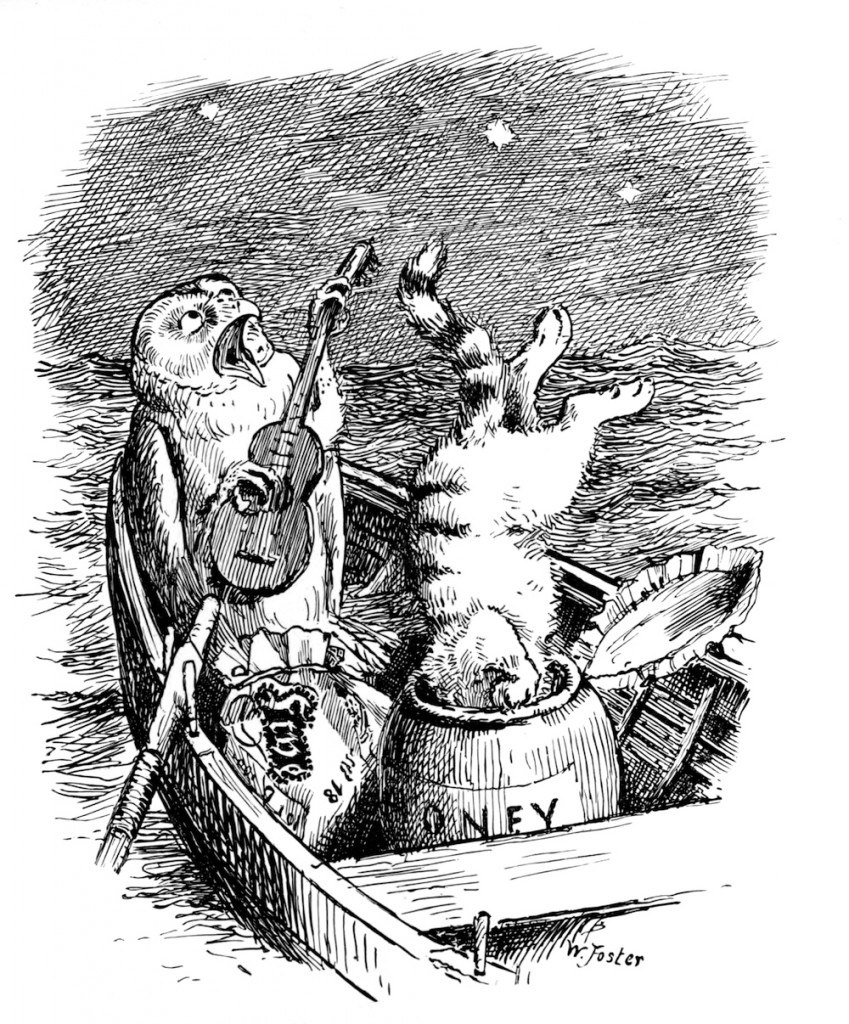 Edward Lear (who published the above in 1871), Lewis Carol, and later Spike Milligan are some of the better-known exponents of the genre. That’s Spike Milligan who lies buried beneath a tombstone bearing the inscription “I told you I was ill”, and who wrote the equally bizarre and wonderful nonsense poem Bongaloo, which starts thus:

‘What is a Bongaloo, Daddy?’
‘A Bongaloo, Son,’ said I,
‘Is a tall bag of cheese
Plus a Chinaman’s knees
And the leg of a nanny goat’s eye.’

This is nonsense of the highest order, and I would advise any English booth interpreter to commit it to memory just in case an amusing filler is needed at some point in your interpreting career. I myself could at times usefully have substituted the above in lieu of my own inferior version of nonsense when interpreting certain Luxemburgish Prime Ministers, if only I had thought of it. Such is my esprit de l’escalier.

One of the finest sights I have ever seen in the booth was a colleague who, unlike me, had the presence of mind to make a decent comedy out of an unfolding tragedy. This did not, as it happens, involve the reciting of poetic nonsense as a cover for his inability to understand the original nonsense, but did involve a visual aid. This was back in the days when no booth was complete without a selection of lethally sharp pencils and a pile of white paper. Skewering a piece of A4 with his pencil, he carried on interpreting whilst all the while waving the white flag of surrender. He was later awarded the Queen’s Gallantry Medal, a decoration he sports on his lapel to this day.

An act of gallantry for which I was never awarded a medal took place many years ago at a police meeting. It was a regular sort of a meeting, not one to stand out from the crowd, really. But in the lunch break we had a visit from a couple of UK delegates, who came bearing a piece of paper on which were written five words. Oh dear, I thought, they’ve actually gone and written down the words we got wrong in the morning session. Mind you if it’s only five, then we’re not doing too badly.

But it turned out that our boys in blue hadn’t come round to arrest us for crimes against language but rather to incite us to commit just such a crime. The crime that we were to commit was to slip the five words written on the piece of paper into our afternoon’s interpreting. I only recall one of the five now, and that was ‘umbrella’. Fortunately the statute of limitations will long ago have placed these misdemeanours beyond the law, so I can reveal that a series of wonderful and nonsensical sentences was constructed that afternoon. Ok, ok, so we crossed the line. We crossed the thin blue line between good and evil and indulged in a little nonsense.

All those years ago we were briefly guilty of producing a load of old cobblers. Let’s just see what our good friend Mr Google Translate has to say on the subject of cobblers: Fr: cordonniers, De: Schuster, La: sutores. Oh dear yes, a cobbler is of course a shoemaker, and when you have two or more shoemakers they are cobblers. But I don’t mean shoemakers; I mean claptrap, hogwash, poppycock, balderdash, baloney, and bunkham. And, why does cobblers mean nonsense you may well ask? Cockney Rhyming Slang again. What do cobblers (shoemakers) use to make holes in leather? Cobblers awls. And cobblers awls rhymes with what? Balls. So cobblers to you Mr Google Translate!