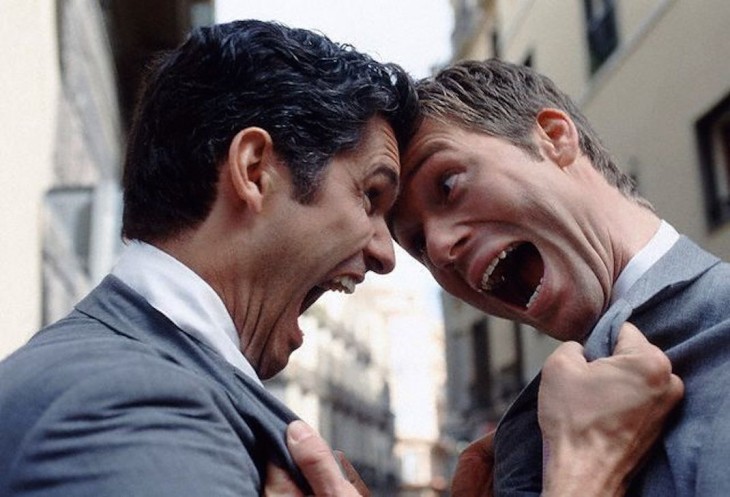 Count Smorltalk on the case again

The Smorltalk column is back by popular demand, but don’t be surprised if this turns out to be my last. When the NSA terrorism algorithm chomps its way through this piece about murdering delegates I may be forced to up sticks and disappear for a while to a location where the long arm of the law cannot reach me.

Sitting in front of a modern interpreting console you can imagine yourself in a range of alternative future careers. I like to fantasize about my future as a call centre operative, for example. I would use my exceptional microphone skills to field endless angry calls from furious customers. I would pretend to be the recorded message assuring callers of the importance of their custom, but I would make sure that the sarcasm in my voice was heavy and unmistakable. I would also take great pleasure in uttering the notorious words “We are experiencing exceptionally high call volumes” and would add something  insufferable like “Don’t forget – patience is a virtue”.

We all do it. We spend hours in the booth fantasizing about other more fulfilling ways to spend the day. I only need to glance at that shiny console with all those buttons and I’m off. I admit it, when the going gets tough I find a console a most comforting presence to have in front of me. Consoling even.

What follows is a confession of a deep and recurring fantasy. But do not judge me as there is not one among you who has not thought it. We all know that on every console, whatever the make, there is a button labeled ‘Nuke Speaker’. Forget the ‘Cough’ button. Try the ‘Nuke’ button next time. Much more effective. Admittedly, there are some installations where the ‘Nuke’ button is engineered only to work when two or more booths press it simultaneously. But it makes no difference as the ‘Nuke’ button was only ever designed as a deterrent. There is not a delegate on the planet unaware of our nuke capability, and the mere fact of the big red button on our console is enough to deter them from using cataclysmically uninterpretable language.

I have spent much of the past week in a shouty mood. It started on Tuesday when a delegate had the audacity to turn round to me, his bulging face distorted into one huge irate scowl, and gesture at me to speak up. It hadn’t occurred to him that the other fifty or so delegates could hear me perfectly well. I scowled back, and hardened the tone in my voice specially for him. Within seconds he had whipped round again. He was almost out of his seat. I thought, Jesus he’s going to come and thump me. He gesticulated wildly that I was a fool and that he couldn’t hear a single word I was saying and above all that it was definitely my fault. His eyes almost popped out of his head with outrage. “Right, where’s the ‘Nuke’ button?” I thought, “This one’s getting it right now. No, no, that’s a weapon of last resort. Its use in such a situation would be MAD.” Realizing the nuke option was off the table, I jumped out of my chair, still interpreting, leant menacingly forward, my face a mask of demonic fury, and gestured violently back to him in the universal language of the street brawler as I turned a huge imaginary knob with both hands in the air and simultaneously mouthed  “TURN UP YOUR VOLUME YOU PRAT!!!!” I could have added “OR I’LL NUKE YOU!” but I didn’t want things to get out of hand. He fumbled around under his desk for a bit and a second or two later glanced back with the sheepish Rab C Nesbitt look of a man who knows he’s an idiot. Interpreter 1. Delegate 0. No loss of life.

So that’s the ‘Nuke Speaker’ button. But hey, there’s loads more fun to be had with the console yet. Look, you can rotate a knob and get all sorts of secret codes on the screen. Here we go. Turn the dial to ‘Fr’. An easy code to break this one – we don’t need an enigma machine for that. ‘Fr’ is obviously for ‘Fear’. When the speaker is impossible and that annoying giveaway tremor is creeping into your voice as the fear grips your throat, just turn the dial to the ‘Fr’ setting. This often helps solve the problem as you will be able to follow the speaker via the calm professional tones of a fluent French speaker. Much easier than the original.

Just occasionally when in fear and trembling you are forced to set the dial to ‘Fr’ you discover that there is a horrible echo. It’s as if the soothing French speaker is listening to you and is repeating your words just a few seconds after you say them. This is because the system is badly designed and allows the French booth to dial ‘En’ just as you dialed ‘Fr’. If only the French booth would read the console instructions more carefully a lot of time spent repeating the same sentence could be saved. If you are from the French booth and are reading this please do take note that ‘En’ is NOT for ‘Enervé’. Do not switch to this setting when you are getting nervous. Use the International standard ‘Fr’ setting please.

Consoles have come a long way in twenty years. When I first started, there were no displays on the consoles. Just an On/Off button and a knob that made a loud clicking noise when you twiddled it. In fact if ever you were stuck for a word you could whizz the knob around really fast a few times to make a terrible scratching sound – the delegates assumed it was static, and your embarrassing trou de mémoire was lost in the crackle. Those were the days. Now of course you need to be an IT specialist just to operate the damn things. Here’s a good one: if you’re bored and it’s not your half hour turn the dial to ‘Dk’. ‘Dk’ is for ‘Dork’ and boy do you get to hear some funny noises from the Dorks. I never cease to chuckle on the Dork setting. Almost as good as an episode of Borgen.

We would all of us be well advised to play a little with the console buttons and to see what’s what. Better to practise in your lunch break than try it out in the heat of battle. To round off this piece I shall reveal one last button fantasy to you. It is the ‘Mt’ setting on the dial. Given that the ‘Nuke’ button can never actually be used, in those situations where the speaker is a menace to society and all else fails, dial Mt for Murder.