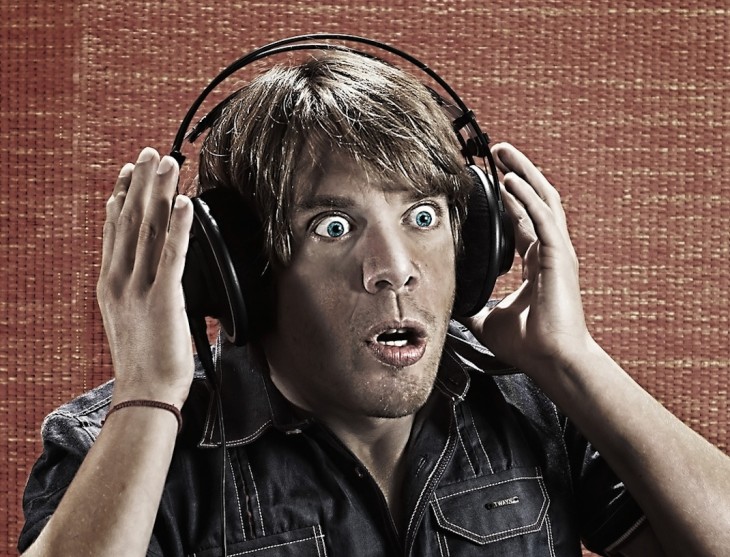 As I was just saying, I’m going to give up interpreting and try something a little easier.

You see, I just don’t know if I can do this much longer. It’s not the interpreting. No, that’s the easy bit. Bring on the interpreting! No, it’s all the other stuff. All the stuff that has to happen before I even get anywhere near the microphone.

So I’m off to do a course in rocket science – as I said, something a little easier for 2015.

But before I go, I thought I would take one last look at the flowchart I posted last time.

What was I thinking of? A neat little page of diamonds and rectangles with no balls-ups? That’s pure fiction.

So I got to work with my red annotating pen, and scribbled on some corrections to bring it in line with everyday experience.

Here is the corrected version: 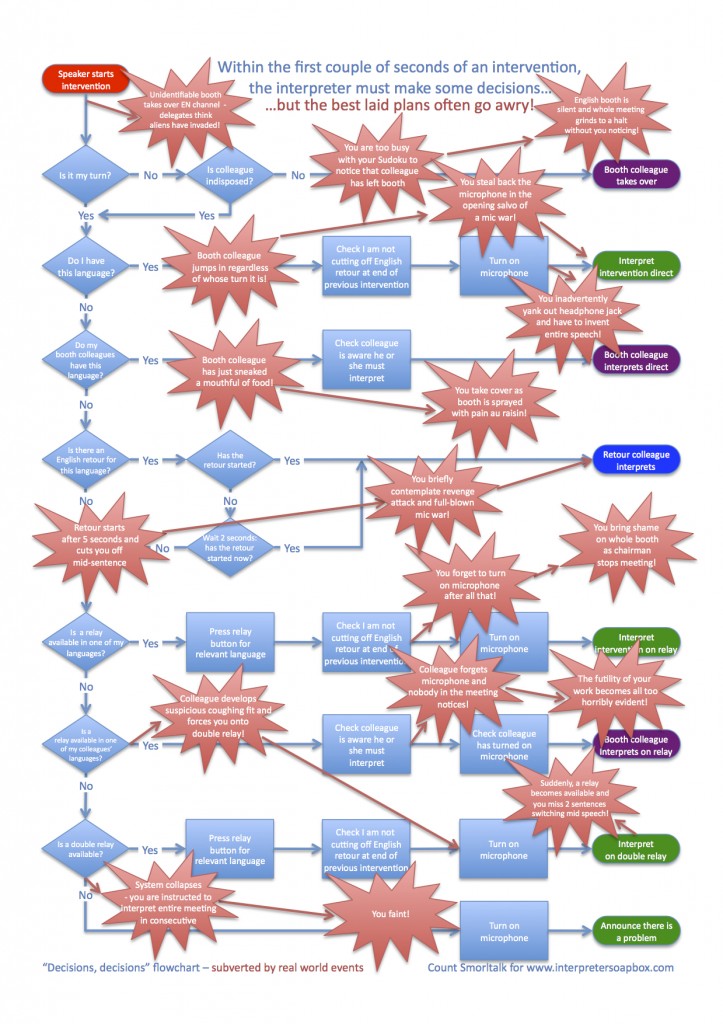 I dutifully sent this off to Mme Blog, with apologies for the late erratum.

Mme Blog was none too pleased at this revision, and in return I received an instruction, which, by way of penance, I felt I must obey. I was told that the only way to make amends for flowchart-gate was to do my lines, or the equivalent thereof: “Write out 10 things that can go horribly wrong off microphone and get it to me by close of business today”. Print deadlines are non-negotiable.

So, here they are: 10 things that can, and did, go horribly wrong off mic.

1. Colleagues I never met before…

“Hello there, how very nice to meet you! My name is Count Smorltalk, but just call me Smorltalk. We haven’t met before have we?” “Err, yes, actually, we have worked together several times…this year.” Oh dear. This is happening to me with increasing regularity, and I suspect is an early indicator that it is indeed time to quit. Occasionally I stop myself just in time and remember to couch it as a question: “….have we worked together before…at all…recently?” I do sometimes vaguely recall a similar-looking colleague looking equally put out some time in the not too distant past, and that, I suppose is a sign of the underlying soundness of my memory. Please don’t take it personally.

“Flick? Yes, he’s a German speaker. Herr Flick. Otto. Come on, surely you remember Otto Flick. I’ll do him if you like. Done him hundreds of times.” I proceed to turn on the microphone with a flourish. Flick turns out to be female. Flick, despite the name, speaks Italian. And my colleague steps in and interprets. And afterwards nothing more is mentioned about Herr Flick, who turned out to be Frau Flick, or more unfortunately, Signora Flick. 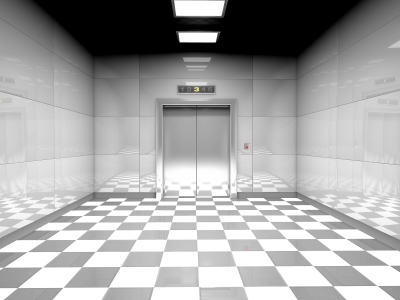 There are lifts in a building in Brussels that lack buttons. I have blithely stepped into such a lift and not known how to get back to my starting point let alone the floor with the meeting room. I would alight at a random floor, and try another lift to see if they’d remembered to fit buttons in that one. They never had. It was quite exhilarating in a way. I met all sorts of nice people in them. Much later, I found out that the buttons are on the outside. Well how stupid is that? And it’s certainly not good for getting to work on time.

A propensity for turning the booth lights up or down is a little indicator of how close a colleague is to the edge. As far as I can judge, the powers that be are conducting a massive mental health experiment by fitting dimmer switches to booth lighting. Here’s how it goes. Enter Smorltalk, booth left. Turns on lights. Enter colleague, booth left. Smorltalk: “Hiya, chilly out isn’t it.” Colleague, turning up lights and ignoring my pleasant salutation: “Can’t see a bloody thing in here! Don’t mind if I turn the lights up do you.” That, dear reader, may sound like a question, but is, of course, not a question.

The English are nothing if not polite. And there lie the origins of the strange game of reverse chicken played out in the English booth before the start of every meeting. The game starts with one colleague asking faux-innocently: “Who‘s going to start, then?” The conventional answer to this opener is, “Ooh, I don’t mind. Do you want to start?”, to which the conventional answer is, “Ooh, I don’t mind, really. What do you prefer?” An awful lot of time can be spared at this stage if some egomaniac then jumps in and shouts, “I’ll start!” but conventionally, there then ensue several rounds of “After you”, “No, after you”, “No, please, after you, I insist”, etc, etc, before everyone gets sick and tired of it and some Type A does the decent thing and screams: “Oh hell, I’ll start if no-one else will!!”, which is ironic and understood to be so, since pretty much every interpreter wants to start.

6. All dressed up and nowhere to go

Seeing as I nearly always lose the “Who’s starting?” game, I am forced to bide my time until mid-morning before getting permission from the control tower to start my engines and taxi out to the runway. Having listened to my colleagues’ magisterial renderings of various of my languages I inevitably discover that the whole meeting promptly switches to English, and I am left sitting there with my engines running but no clearance for takeoff. There I sit wasting fuel as the second hand ticks its way through my half hour. But just when I have given it all up as a lost cause, there will be an intervention in, say, Bulgarian, which I will do extremely badly from a dodgy relay. By the time lunch comes around, this will have been my entire contribution to the proceedings, and I will hate everybody and everything. But most of all I will hate myself for not being a better reverse chicken player.

Years ago, audio equipment was the size of a fridge, lived in the living room and always had a great big knob on the front marked Volume. Now we gaily click and swipe and flick the screens of our mobile devices to get them to obey us. These days there is never a big knob on the front of our mobile devices marked Volume. All of which is very distressing if you are an older colleague whose shiny new iPad starts broadcasting a YouTube clip in the middle of a speech and you suddenly start to wonder where that great big knob is. The knob, c’est toi, as they say. So what with the dodgy knees and the absence of a great big knob marked Volume, there is nothing for it but for the colleague to start exploring their shiny glass lozenge to see where they have hidden the great big Volume knob. And that, in my experience, can take them quite some time…

Only one thing is more distressing than a mobile device that suddenly starts playing a YouTube clip at full volume mid-speech, and that is a mobile device that is shoved under your nose playing a YouTube clip at full volume between interventions. This will be your hyperactive media-mad colleague who spends evenings downloading clips to regale the booth with in quiet moments. And your ears will still be ringing from the sound of gunfire in Die Hard 17 played full volume into your face, when the next speaker proceeds to answer the technical question you had struggled but failed to hear through the Armageddon unleashed on the booth for the past minute and a half.

I once worked with a senior colleague in a meeting where the English booth had a button that enabled us to address the whole room over a loudspeaker. Spotting a potential banana skin ahead, my colleague took masterful charge of the situation, announcing in a deep, resonant, voice, that a rogue microphone was on in the room. Believing this to have been the voice of God, delegates immediately started to hunt for the offending microphone. All the delegates got stuck in, and one in particular went round the room pressing every button he could find, thereby turning on a sequence of microphones. But since only three microphones could be on at once, a situation quickly arose whereby microphones were going off as quickly as he could turn them on, and before long the room was in total chaos. It was like a huge game of Whack-a-mole, just with microphones.

One of the most sublime moments I have ever witnessed in an interpreting booth was this. The place: plenary meeting of an international organization. The time: late evening. The cast: Smorltalk, one colleague recognized to be one of the world’s finest interpreters, a third interpreter. The plot: Chairman announces next speaker. Next speaker begins intervention. Illustrious colleague indicates that he is on the way to the microphone, this being evidenced by a slow forward motion of the torso and right arm. Speaker gets into his stride. Colleague is now pretty much level with the console. Speaker is going great guns. Colleague turns up the volume and discovers that this is not one of his languages. He then ascertains that neither I nor the other colleague have the language in question. Speaker is reaching climax. Colleague finds a relay button and presses it. Speaker finishes his intervention. Colleague hears last two words of relay’s interpretation. Thinking he’s turning off the relay, colleague turns on the microphone and proceeds to deliver straight into the open microphone the most perfect summary of a speech I have ever heard: “BUGGER!”