“The Man in the Middle”: Viktor Sukhodrev 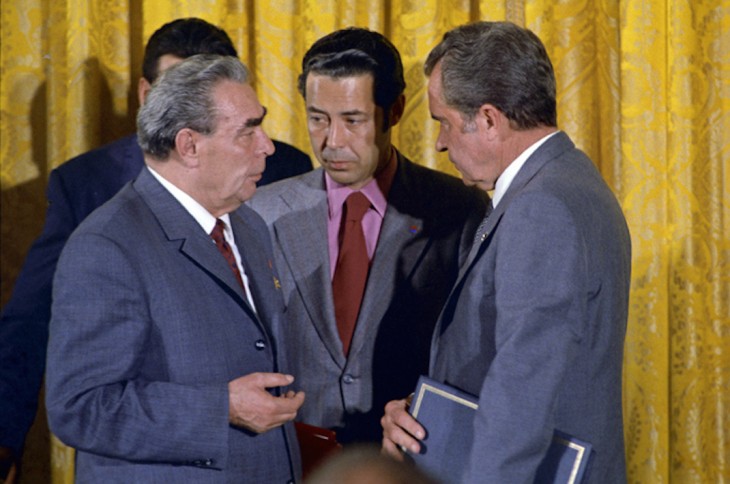 In Europe and America, there’s a growing feeling of hysteria
Conditioned to respond to all the threats
In the rhetorical speeches of the Soviets
Mr. Khrushchev said ‘we will bury you’
I don’t subscribe to this point of view
(Sting, Russians, 1985)

The famous words “We will bury you” were used in 1956 by Soviet leader Nikita Khrushchev, while he was addressing Western ambassadors at a reception at the Polish embassy in Moscow. What Khrushchev meant was that socialism will prevail over capitalism, but many Westerners interpreted it as a threat and the phrase came to epitomize the rivalry between the US and the USSR.

Khrushchev obviously spoke Russian and his ”Мы вас похороним!” was put into English by a man whom the New York Times later called “the king of interpreters”: Viktor Sukhodrev.

Sukhodrev passed away yesterday at the age of 81.

He was born in 1932 and spent his childhood in London, with his mother, who worked at the Soviet trade mission. When he graduated from the Military Institute of Foreign Languages, he was assigned to the foreign ministry as the personal interpreter for Krushchev. He later worked for other Russian leaders, including Leonid Brezhnev and Mikhail Gorbachev. When asked about his part in making history, Sukhodrev said: ”they formulated it – I interpreted it.”

It was at the tender age of 8 that he decided to become an interpreter, “the man in the middle”, as he put it in a TV interview. He started at the Soviet Embassy School and found himself interpreting school officials on public occasions. “And if I was going to do that [for a living], I felt, I was going to be damn good. Maybe the best.”

In 1972, Sukhodrev was the sole interpreter during the Moscow summit between Richard Nixon and Leonid Brezhnev: ”Despite pressure […], the President [Nixon] refused to use an American interpreter, relying instead on the Soviet veteran Viktor Sukhodrev, who had translated for Kennedy and Khrushchev in Vienna [in 1961]” (Reynolds 2007: 244*) In his memoirs (1990), Nixon later recalled: “I knew that Sukhodrev was a superb linguist who spoke English as well as he did Russian, and I felt that Brezhnev would speak more freely if only one other person was present.”

Interestingly enough, the interpreting throughout the summit was consecutive; apparently Nixon had once tried simultaneous but after five minutes decided that it “made him nervous” (Reynolds 2007*).

In his book (1999) “Язык мой – друг мой” (My Language, My Friend), Sukhodrev wrote: ”В этом высший пилотаж моей профессии: стать как бы невидимым, но присутствующим” (The ultimate challenge of my profession: be present, and yet invisible). He certainly rose to that challenge. As the NYT put it: “was present but not present, anonymous but indispensable”.

A conference interpreter par excellence then.
Although no longer anonymous.