Would you like your child to become a conference interpreter? 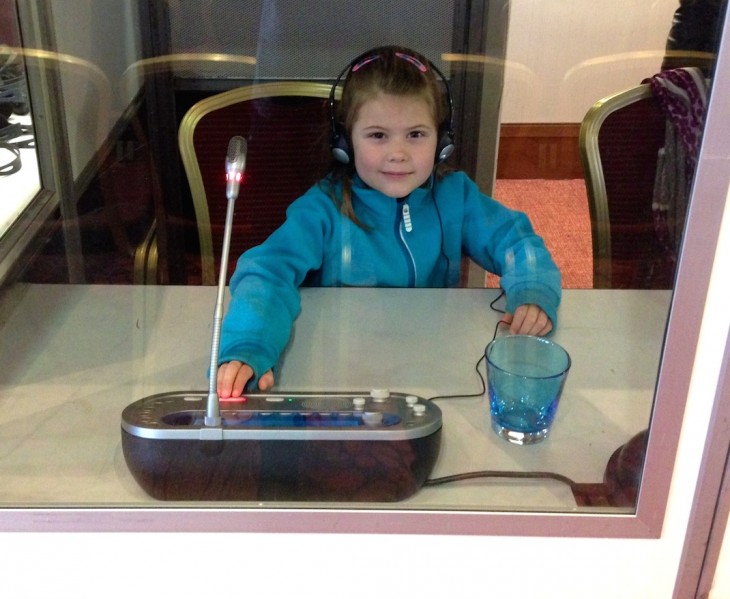 Well, that’s what we may think. They will of course make up their own minds.

There are some things about my job that I love: the freedom, the variety and the fast pace – but there is no way of telling if they would be equally appealing to my daughter (now 7). Or if the job will even exist in 20 years’ time. For now, in the which-parent’s-got-the-cooler-job competition, her mobile games producer dad wins hands down. How do I know? Guess who she asked to come in to school to talk about their job. Where did I go wrong? 😉

But it’s not a competition. And in any case, she has decided she wants to be an archeologist. Because she can’t be Luke Skywalker.

Would you like your child to become a conference interpreter when he or she grows up? I put that question to a few colleagues. Here are their answers.

Carmen Soliño
Do I want Pablo to become an interpreter? Considering that I am just hoping he will learn to walk soon, I just want him to become whatever makes him happy (yes, seriously). I think there are many things that are really exciting about our job, and I hope I can give him that impression when he has a bit more understanding. But I also don’t know how much need for interpreters there will be when he enters the workplace in a couple of decades. Either way, I do hope he gets an interest for other languages and cultures. Right now, he speaks baby talk fluently and very assertively!

Sirpa Lehtonen
I have two daughters, Mia, 23, and Mikaela, 21. They  grew up in Brussels, going to school in French but speaking Finnish at home. The elder, Mia, is unlikely to follow in my footsteps as an interpreter as she has already chosen a different career path. She speaks French as her mother tongue (strongest language), English, Finnish, Arabic, Dutch, and some Spanish.

The younger one, Mikaela, might opt for this profession one day – not immediately, but in five or ten years’ time, who knows. She would be a candidate for the French booth and on top of French, she speaks English, Finnish, Spanish and Dutch. Being an interpreter myself, I paid a lot of attention to language-learning as the girls were growing up. They had private Finnish lessons for about ten years, and as English is only taught in Belgian schools from the age of 14 onwards, I made sure they were exposed to English in both classroom and informal contexts much earlier.

In a way it would be nice if one of my offspring chose to become an interpreter because that would mean we could share things on a completely new level. I have always loved learning and using languages, discussing language-related phenomena, observing language change, etc.  I feel very privileged to have been able to make a living out of my passion.

In today’s world, I guess any parent would be happy if their children manage to find work, any work. With youth unemployment reaching a staggering 50% in some EU countries, how picky can you be? From that point of view, interpreting might be a good choice, as there still are career opportunities, both as FL and staff.

Then again, the profession is changing rapidly with new technologies. If remote interpreting becomes the new standard, I would be less keen on my daughter becoming an interpreter as that would change the profession profoundly. I am happy to have done most of my career in live meetings, with interpreters in the same meeting room with the delegates. I understand that new technologies are here to stay and the younger generation do not have similar reservations as us oldies do, but a lot depends on the extent to which interpreters will be cut off from their listeners in their daily work and on whether we manage to defend decent working conditions.

Deborah Muylle
At the moment, my son is almost 5 and wants to work at ToysRUs and take the train there just like daddy does in the mornings. My 6-year-old daughter wants to become a dolphin when she grows up and, if that’s not possible, her ambitions range from becoming a dolphin/sea lion trainer to a member in a rock band. So far they have never mentioned conference interpreter in their long list of future professions. Like every mother I want them to be happy and good at what they like doing.

Hopefully, they will grow up to be bilingual English and Dutch. They already have French lessons in school, which they love, and they go to go to Dutch school once or twice a week.

I love my work and I hope I’ll be able to do it until I feel ready for retirement but ever the pessimist I would prefer my children not to become interpreters. I think the need for interpreters is going to diminish due to the growing dominance of English, and I wouldn’t want them to have to live with the level of unpredictability the job can bring.

Krzysztof Kotkowski
I never forget how lucky I was to have become a conference interpreter. And yet, if I ever suggest to my kids that they choose interpreting as a way of life, I do it very carefully. Part of the reason is they have many talents which might end up laying wasted if they did. After all, the job isn’t all that creative and has its limitations. I wouldn’t want to lead them into a dead end either – scores of promising interpreters are already awaiting contracts. And who knows what the profession will look like one, two or three decades from now. The beauty of it is that, with the their strong language background, the fallback option of becoming interpreters is always out there should their other careers fail them. In which case having gathered other experience in life would only help them along the way.

Many thanks to Deborah for the photo!